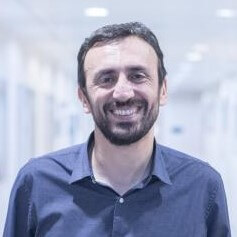 Özet: In the first part of my talk, I will talk about the use of optical tweezers to quantify the effects of radiation therapy on the red blood cells (RBCs). RBCs were exposed to clinically prescribed radiotherapy doses of 2 Gy, 12 Gy and, 25 Gy, and each radiotherapy dose group was compared to a non-irradiated group. Cells were characterized by stretching using dual-beam optical tweezers and compared using the resulting deformability index. We conclude that the measurement of deformability index by dual-beam optical tweezers can serve as a sensitive biomarker to probe responses of cells to the radiotherapy.

Konuşmacı Hakkında: Mehmet Burcin Unlu received his bachelors and masters degrees from METU and Boğaziçi departments and completed his Ph.D. at Stevens Institute of Technology. In his postdoctoral work, he focused on cancer imaging and medical physics. He worked as a researcher for five years at the Tu &Thomas Yuen Center for Functional Onco-Imaging, Radiological Sciences, School of Medicine, the University of California at Irvine. He has been a faculty member in the Department of Physics at Boğaziçi University since 2009. He was the head of the same department between 2018 and 2020. He received a Fulbright fellowship and worked at Stanford University School of Medicine Laboratory of Artificial Intelligence in Medicine for one year between 2017- 2018. He went to Hokkaido University School of Medicine and worked on proton therapy for six months. Burcin Unlu continues to work on biomedical physics and applications of physics in the field of health at the Bogazici University Medical Imaging Lab, which he founded in 2012.

This website uses cookies to improve your experience while you navigate through the website. Out of these, the cookies that are categorized as necessary are stored on your browser as they are essential for the working of basic functionalities of the website. We also use third-party cookies that help us analyze and understand how you use this website. These cookies will be stored in your browser only with your consent. You also have the option to opt-out of these cookies. But opting out of some of these cookies may affect your browsing experience.
Necessary Always Enabled
Necessary cookies are absolutely essential for the website to function properly. This category only includes cookies that ensures basic functionalities and security features of the website. These cookies do not store any personal information.
Non-necessary
Any cookies that may not be particularly necessary for the website to function and is used specifically to collect user personal data via analytics, ads, other embedded contents are termed as non-necessary cookies. It is mandatory to procure user consent prior to running these cookies on your website.
SAVE & ACCEPT